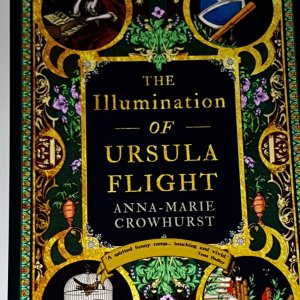 My book club read for this month was ‘The illumiation of Ursula Flight’ by Anne Marie Crowhurst.
Even though this book has a nice looking cover I can’t say that it is a book I would have picked up myself
The Goodreads blurb reads

“Born on the night of an ill-auguring comet just before Charles II’s Restoration, Ursula Flight has a difficult future written in the stars.

Against the custom of the age she begins an education with her father, who fosters in her a love of reading, writing and astrology.

Following a surprise meeting with an actress, Ursula yearns for the theatre and thus begins her quest to become a playwright despite scoundrels, bounders, bad luck and heartbreak.”

On the face of it it sounds like a ‘coming of age’ historical drama, which it essentially was, and not in an era I really have much an interest in. So it was nice to read something a little out of my comfort zone.

As the blurb says, Ursula is a young girl with aspirations of the stage. Unfortunately for Ursula her parents have a life planned for her and being a lowly actress is not one of them. The story follows Ursula’s struggles to follow her parents wishes whilst trying to stay true to herself.

I loved the way this was written, its told from Ursula’s point of view and interspersed with little snippets of play writing by Ursula. Ursula is a very strong character that is way ahead of the era she lives in. What I loved most about this book was near the end, so be warned the next bit does contain spoilers.

The ending for me was the best bit, as the author could very easily have been trite and given Ursula the happy ending of becoming successful AND ending up with the love of her life. Instead her success eventually came after a lot of trying, and her love interest is just a background thought dealt with by a secondary character, I think this gave it a more powerful ending.

Another clever aspect I found, was also part of the ending. During her life there are two men in particular who have wronged Ursula, they are both there at the end to see her play. One attempts to see her afterwards, but when he can’t get an audience with her leaves a message

“ . . Tell her I wholeheartedly beg her forgiveness – for everything”

Now the chances are this IS Sam, but I feel from the description by Bunty (a potentially elderly woman)

“. . tall and brown and very handsome in the eyes, now I think ‘pon it”

this could also be her Tyringham her Husband, and I think leaving you to draw your own conclusions as to who it was is quite clever.

To summarise, it’s a well written well reserached coming of aged historical drama with a strong female lead and an admirable feminist message.