So, another month draws to a close and seeing as I have been woefully neglecting this blog (I blame Homer!)

You are now going to get 3 reviews for the price of 2! You lucky, lucky people!

So what do I have to show for my month? I did read 7 books (I’m including a book that I started on 28th February and Finished on 3rd March as I spent more of March reading it) (I have quite literally just realised that I’ve read seven books, so now I don’t feel so bad about not writing.))

You’ll be pleased to know I am NOT going to review all 7 books here and now, just the three that fall within my reading challenges for this year.

So onto my book club read of ‘The Binding’ by Bridget Collins.

This kind of accidentally ended up being our book club read, after I posted a picture of 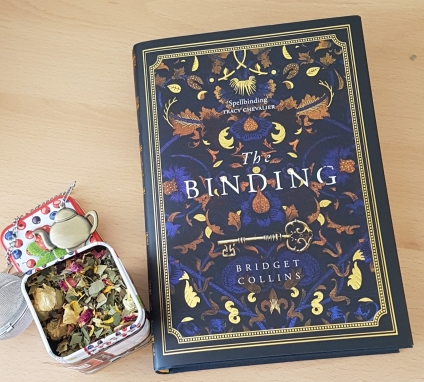 my latest purchase from my local Bookshop/Teashop to our book group page. So many of us had either just bought the book or were going to buy it, so we decided to have it as March’s read.

Emmett is a boy with a gift, he doesn’t realise it but he is a natural ‘Binder’. Binders are people who can take any memory you wish to forget and bind it in a book. So Emmett is sent as an apprentice to a local Binder, but this story isn’t about Binding, this is about Emmett and something he may have forgotten.

I’ve said before that I appreciate a good-looking book, and this is one good looking book. The cover art just draws the eye and the marbling effect on the inside cover is just beautiful. Then you have this little blurb

Captures the imagination, right? and promises of ‘Magical Realism’! So how could I resist it?

I love reading a book with a hint of magic and being able to think that ‘yup, this could happen’ The Binding is categorized as magical Realism, although it doesn’t totally deliver on it’s promise.
The story starts out around Emmett, and you know there is a deep secret there which will eventually unravel. He is sent to an old Binder as an apprentice to learn the trade, which basically involves laying your hand on the person who wishes to forget as they tell you their memory. That is essentially it for the Binding aspect of the book. This story is predominantly about Emmett and his past, and ‘Binding’ plays a very small part in that. Don’t get me wrong I did really enjoy the direction that the book took, but as somebody in my book club pointed out, we would have liked to know more about The actual Binding and the books. Maybe if Bridget Collins releases more books based around this I may get my wish!

Success!! I actually got a recommendation from this months Penguin Reading Challenge ‘The Awakening by Kate Chopin.
The Awakening Is a groundbreaking story about female infidelity in the Victorian Era.
I’ve come to the conclusion that some reviews are best for me to write ‘on reflection’ as my first thought after reading ‘The Awakening’ was ‘meh’, then I put some thought into it.
I can see how when this book was first released it did cause a bit of a furore, and I can even see that possibly even in this day and age if this had been one of the first books I had read on relationships how it would have affected me. However at the tender age of 40, with all that I have read and seen it just doesn’t have the intended impact on me, and that is a shame.
A similar thing happens with music, songs that were released in the sixties and considered ‘groundbreaking’ don’t move me as much as they did people back then because I’ve heard so much music that was ‘inspired by it’ that it doesn’t have the same wow factor as it did when it was first released.
Anyway, back to ‘The Awakening’ I think it really did have a strong ending though, and for that alone it will stick with me for a while.
And finally, my reading Roulette and boy I picked a doosey this month.
Homer’s ‘The Iliad’

Personally I think this should have also counted towards my classic read for the month aswell, but hey, I don’t make the rules . . oh, wait . .
For those of you not in the know The Iliad is Homers epic poem about the Trojan war, this version was translated by EV Rieu.
What can I say about this, without sounding like a complete philistine? It is essentially a Soap Opera based around testosterone fuelled macho men and a bunch of Gods having a hissy fit! I loved it!

Crivens, there’s a lot of people in it though!! It did take me a little while to get into it, and being a little rusty on my Greek mythology I kept forgetting who was on whose side, but I eventually found my stride, and if you can wade through all the different ways that different people were killed (Homer does really like describing how each person died, potentially the Tarantino of his day!) It is a really detailed account of a mythological war that inspired a whole wealth of literature, and I can see why it is a classic.